Ororo Munroe was an African street thief before she was found by Professor Xavier. Now she is a leading member of the X-Men and Queen of Wakanda under the moniker of Storm.

Intro: Storm flies onto the stage, with lightning striking just before she lands.

Outro: Storm strikes the opponent with lightning and they pass out. She then flies away, with the opponent in a small hurricane trailing behind her.

Character Trait - Up In The Air - Storm takes to the skies, altering her moveset to focus on wind and juggling the opponent.

Super Move - Goddess Of The Sky - Storm creates a rain cloud over the opponents head. She then brings down four lightning bolts around the opponent, which electrocute them. Finally, she picks them up in a tornado before striking them back down to the ground with lightning.

Punk - Can be bought with in-game credits. 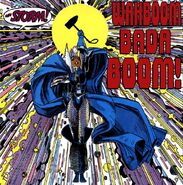 Weather Wizard Costume
Add a photo to this gallery
Retrieved from "https://injusticefanon.fandom.com/wiki/Storm_(Dimensional_Rift)?oldid=38216"
Community content is available under CC-BY-SA unless otherwise noted.