Peter Quill is the child of J'Son of Spartax, emperor of the Spartoi. When his mother was killed in front of him and Peter was taken to space, he began his career as adventurer and Guardian of the Galaxy as the legendary Star-Lord!

Intro: Star-Lord is riding his spaceship to a retro tune. He then ejects himself and enters the arena, using his leg thrusters to slow his descent.

Outro: The opponent wakes up in a chair and tries to move. They are stopped by a wooden hand and the scene switched to a view of the Guardians of the Galaxy!

Character Trait - Element Gun - Star-Lord fires out a shot from the element gun, which can either burn, shock, freeze or knockback the opponent.

Super Move - Bunch of A-Holes - Star-Lord fires a rock at the opponent, sending them flying. They are then caught by Groot, who throws them into the air. Rocket Raccoon jumps up and smacks them back down with a missile. Drax then kicks them into Gamora's sword. she then throws them back to Star-Lord.

Annihilation - Can be bought with in-game credits. 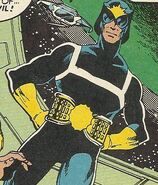 Adam Strange Costume
Add a photo to this gallery
Retrieved from "https://injusticefanon.fandom.com/wiki/Star-Lord_(Dimensional_Rift)?oldid=38218"
Community content is available under CC-BY-SA unless otherwise noted.