Start a Wiki
The leader of Hydra during World War II, there is not a person in the world who has not heard of Captain America's most heinous foe. Finding himself in the 21st Century, Johann Schmidt seeks to retake Hydra and march it into the new world. Soon, the people will have another reason to fear the Red Skull.

Intro: Red Skull walks onto the arena, smoking a cigarette which he quickly puts away.

Outro: Two HYDRA soldiers come up behind Red Skull. He orders them to fire, and the shoot at an offscreen opponent.

Super Move - Brave New World - The opponent is hit by a flashbang grenade as a circle of HYDRA soldiers close in on them. They begin firing for a few seconds and once they stop, Red Skull walks forward, before pistol whipping them to the floor and stomping once on their head.

White Skull - Can be bought with in-game credits.

Crazed - Can be bought with in-game credits. 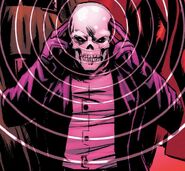 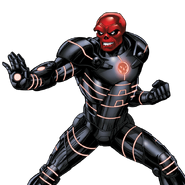 Two-Face Costume
Add a photo to this gallery
​​​​​​​
Retrieved from "https://injusticefanon.fandom.com/wiki/Red_Skull_(Dimensional_Rift)?oldid=45475"
Community content is available under CC-BY-SA unless otherwise noted.