The heir to the Luthor fortune and owner of Lexcorp, presidential candidate Lex Luthor is a shadowy manipulator of illegal events. He often funds criminal organisations and projects, always to his own long-term gain. However, if anybody interferes, be it Superman or anyone else, Luthor is not above donning his mighty warsuit and laying the smackdown on his rivals.

Intro: Lex Luthor lands on the arena, holding a glass of champagne. He takes a drink before throwing it away carelessly, stating that he will simply buy more.

Outro: Lex Luthor walks over to the opponent and blasts a hole in their head. He then walks away, telling someone over the communicator to get a special drink ready.

Character Trait - Brains and Brawn - Luthor taps his chest, enabling three powerful chest beams to be fired from his logo.

Super Move - Million Dollar Beatdown - Luthor focuses a blast with encases the opponent in a laser net. While they are trapped, he repeatedly smashes them in the gut before backhanding them to the other side of the arena.

Silver Age - Can be bought with in-game credits.

Earth-3 - Can be bought with in-game credits. 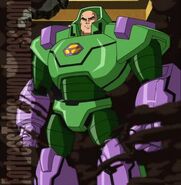 Fixer Costume
Add a photo to this gallery
Retrieved from "https://injusticefanon.fandom.com/wiki/Lex_Luthor_(Dimensional_Rift)?oldid=38242"
Community content is available under CC-BY-SA unless otherwise noted.