Jean Grey was the first student at the Xavier School for Higher Learning, with the abilities to telepathy and telekinesis. As a member of the X-Men, Jean has regularly sacrificed herself to save the world, regularly being resurrected by the mysterious entity known as the Phoenix Force. As the host of the Phoenix, Jean has near-limitless power, but also a near-limitless capability for evil.

Intro: A fountain of flame erupts from the ground in the shape of the Phoenix Force and Jean Grey rises out with it, entering the arena.

Outro: Jean Grey extends her hand and the opponent is held in the air by flaming chains, clearly in pain. Jean then looks at the camera, flaming.

Character Trait - Rise From The Ashes - Jean Grey switches between two fighting styles, one using the Phoenix Force and one using Jean's natural psionic abilities, which show up pink.

Super Move - I Am Life Incarnate - Jean sends out a wave of fire, which strikes the opponent and teleports them under the sea. She then sends up a column of fire underneath them, before tapping the ground. The location then explodes and sends the opponent flying back to the arena.

Marvel Girl - Can be bought with in-game credits.

Animated - Can be bought with in-game credits. 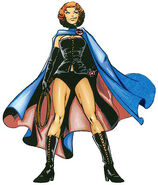 Black Queen Costume
Add a photo to this gallery
Retrieved from "https://injusticefanon.fandom.com/wiki/Jean_Grey_(Dimensional_Rift)?oldid=38234"
Community content is available under CC-BY-SA unless otherwise noted.