Injustice: The First Insurgent  is yet another action fighting video game based entirely on Batman and the DC Comics Universe. It is developed by WhataToonProductions and Warner Bros. Interactive Entertainment. It is the prequel to Injustice: Gods Among Us, and it was released for Xbox 360, Playstation 3, Wii U, XBOX One, and Playstation 4. It's franchise sequel is Injustice: Regime of Arkham, which is yet to be released and has little to no information revealed so far. It is confirmed to be developed by Red Average and Cartoon44.

The game was created by Toon, and the script was written by the same person. The script reveals the dialogue and the events of the game. It revolves around the plot of the game, where the Batman must stop Joker from mixing the Man-Bat serum with the water of Metropolis as well as many other cities.
Injustice: The First Insurgent 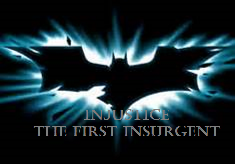 Developer
What a Toon Productions
Publisher

Taking place as a prequel to Injustice: Gods Among Us, it features Batman from Earth 1 as he works with the what used to be Justice League, as they learn of Joker's devestating plan of creating chaos in Metropolis. You will get to play as Batman and other Bat-Family related characters as you go into battles and search for quests across numerous areas.

This is the first 3D game where not only will you be able to fight against characters in a 2D format, but you will be able to search for the battles you get into as you roam across Gotham and other areas and find challenges/missions that the Justice League assigns you to.

A year before the events of Injustice: Gods Among Us in the alternate universe of the soon-to-be regime and insurgency, Joker begins to rehearse his master plan of ultimate destruction and chaos by setting off protoype bombs that contains Man-Bat serum chemicals. As the bombs go off, the chemicals are dispersed into Metropolis' main water stream. Superman is the first one to be mutated by the serum and it isn't too long before Batman and Wonder Woman discover it. They escape the sewers from an infected Superman and Batman concludes he must go to Gotham to seek out Kirk Langstrom and get a cure for his serum as well as find out why the serum ended up in the wrong hands.

Meanwhile, Joker "pays" Deathstroke in order to stop Batman, so he doesn't intervene in his maniacal plot. Deathstroke soon finds the Bat and battles with him, but only for a severely injured Batman to escape. Batman requests help from his son, Robin, but it's not too long before Damian runs into trouble himself with Clayface. Damian battles Clayface's minions, easily defeating them with his staff, and then battles Clayface himself. Damian easily defeats him once again, and as he is about to leave he is approached by "Batman". Batman asks for help and as Damian walks over to him, Batman stabs Robin, injecting him with the Man-Bat serum. Robin battles Batman in response, and soon realizes he is nothing more than Clayface once again.

Robin arrives to Batman's aid, severely injured. Together they both enter the batmobile and head to the Batcave for help, where Bruce realizes he needs to go back out to Metropolis to stop its newest threat- Superman, who is infected with the Man-Bat disease. Robin, unsure of whether his father will make it out alive or not, tries to convince him to come along and eventually battles him for it. Batman tells Robin it's too dangerous for him to go out into a battle with Superman and leaves the Batcave with his word.

Arriving in Metropolis, Batman saves the Flash from Superman, who nearly kills him. Batman battles Superman and quickly realizes he isn't prone to the affects of kryptonite any more with the new Man-Bat mutation. After knocking him down with a sonic batarang, he quickly ignites in a battle with Superman. After the fight, Superman is injected with the temporary formula and transformed back to normal. When the Justice League reunites, they soon encounter Deathstroke with new information to Kirk Langstrom's location and subtle intel on Joker's endgame. Soon after, Batman decides to leave to Peña Duro on Santa Prisca where Bane is holding Kirk Langstrom captive for replication of his Man-Bat serum. Little does he know, Poison Ivy is the guard of the island. Falling into her trap, Batman quickly faces near-death until Alfred sends in an anti-plant toxin that kills the mutant vines. After the battle between Poison Ivy and Batman, Batman leaves her promising to come back and bring her to Arkham. Heading to the prison in Pena Duro, taking out Zombie, Trogg and Bird, he comes to Langstrom's rescue where he is being held captive by Bane. He transforms into Man-Bat too soon, escaping with too little information for Batman to run on. Batman chases after him, soon taking him out and putting him unconscious where he decides to get answers later as Bane disappears from sight.

Injustice: The First Insurgent features a set of characters and voice actors, some reprising their roles from TV series such as Young Justice and Batman: The Animated Series.

Not playable characters include:

Injustice The First Insurgent takes place one or two years before Injustice Gods Among Us. Metropolis is a major setting, as it was in Gods Among Us, where Superman is mutated into a Kryptonian Man-Bat. It also features Gotham City, Batman's home ground where he goes to several different locations to battle.

Aftermath of Batman and Deathstroke's battle

Batman traveling from tower to tower. 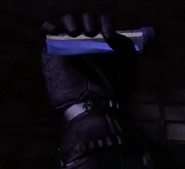 See here for the Music Score of Injustice: The First Insurgent.

Retrieved from "https://injusticefanon.fandom.com/wiki/Injustice:_The_First_Insurgent?oldid=45393"
Community content is available under CC-BY-SA unless otherwise noted.