When scientist Bruce Banner was struck by gamma radiation, he developed the ability to transform into his ever-raging counterpart. Often staying away from civilisation, Banner fights evil to keep people safe as the Incredible Hulk!

Intro: Hulk is in the desert, leaping closer and closer to the camera. Finally, he leaps over the camera. The scene shifts to Hulk landing in the arena and roaring at the opponent.

Outro: Hulk grabs the opponent and jumps away. The scene shifts to him wrapping the opponent in iron girders before leaving them behind.

Character Trait - Gamma Rage - Hulk glows green and increases in size, which increases his attack but removes his ability to jump or duck.

Super Move - HULK SMASH!!! - Hulk unleashes a sonic clap at the opponent. As they are disoriented, Hulk punches them into the ground. He then performs the 'Puny God' move from the Avengers. Finally, he throws the opponent to the other side of the arena.

Planet Hulk - Can be bought with in-game credits.

Mr. Fixit - Can be bought with in-game credits.

Gray - Included in the 'Blast From the Past' skin pack. 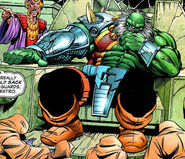 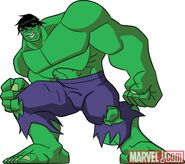 Solomon Grundy Costume
Add a photo to this gallery
Retrieved from "https://injusticefanon.fandom.com/wiki/Hulk_(Dimensional_Rift)?oldid=38208"
Community content is available under CC-BY-SA unless otherwise noted.