A winged warrior who is locked in a cycle of rebirth, Hawkgirl is always destined to be born anew, yet still finds time to help take down evil.

Intro: Two crooks are seen  falling to the ground, unconscious, before Hawkgirl lands and readies her mace.

Outro: Hawkgirl flies straight up, opponent in hand. She then drops him onto an airborne passenger jet and flies away as they struggle to hold on to the wing.

Character Trait - Take Flight - Much like in Injustice, Hawkgirl begins flying. This opens up new moves and helps to avoid attacks.

Super Move - Thanagarian Brutality - Hawkgirl knocks the opponent into the air using her mace. She then flies up and hits them once more, shoots them with her crossbow a few times, before slamming them back towards the stage.

Earth-2 - Can be bought with in-game credits.

Hawkwoman - Can be bought with in-game credits. 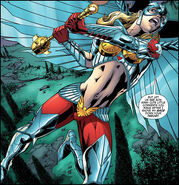 Archangel Costume
Add a photo to this gallery
Retrieved from "https://injusticefanon.fandom.com/wiki/Hawkgirl_(Dimensional_Rift)?oldid=38193"
Community content is available under CC-BY-SA unless otherwise noted.