Start a Wiki
Norman Osborn an elite businessman with an unquenchable thirst for power, until one of his experiments transformed his mind, clearing his thoughts but also driving him to insanity. Now equipped with the highest-grade technology, Osborn lays havok to New York City as the Green Goblin!

Intro: Two pumpkin grenades land on the stage, creating a smokescreen which Green Goblin then flies through on his glider.

Outro: Goblin takes control of his glider and brings it forward to impale the opponent through the gut, as he watches on with glee.

Character Trait - Goblin Glider - Green Goblin summons his glider and can use it to fly and use new attacks for a short time.

Super Move - Stacy Special - Goblin grabs the opponent by the neck, before jumping on his glider and flying away. Goblin repeatedly claws at the opponent until they reach a point high in the sky, where Goblin then lets go, letting the opponent land roughly on the stage.

Corporate - Can be bought with in-game credits.

Iron Patriot - Can be bought with in-game credits. 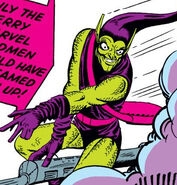 Scarecrow Costume
Add a photo to this gallery
Retrieved from "https://injusticefanon.fandom.com/wiki/Green_Goblin_(Dimensional_Rift)?oldid=44759"
Community content is available under CC-BY-SA unless otherwise noted.