Victor Stone was an aspiring athlete before an accident forced him to live with a cybernetic body. As Cyborg, Victor uses his newfound talents to aid the Justice League!

Intro: Cyborg is seen running through Apokolips, shooting parademons, before jumping through a Boom Tube and landing on the stage.

Outro: Cyborg is repairing himself on the Watchtower whilst the opponent is in the background banging on their cell.

Character Trait - Software Update - For a limited time, all of Cyborg's laser attacks will increase in power.

Super Move - All-S.T.A.R. Player - Cyborg activates a Boom Tube behind the opponent and punches them, knocking them through it. It leads to Apokolips, where the opponent is picked up by a parademon and dropped into Darkseid's throne room. Darkseid lays a smackdown on them before a Boom Tube returns them to the arena.

Flashpoint - Can be bought with in-game credits.

Omegadrome - Can be bought with in-game credits. 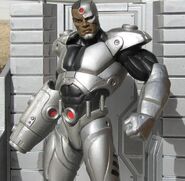 Deathlok Costume
Add a photo to this gallery
Retrieved from "https://injusticefanon.fandom.com/wiki/Cyborg_(Dimensional_Rift)?oldid=38198"
Community content is available under CC-BY-SA unless otherwise noted.