Barbara Minerva was an archaeologist working for ARGUS and a close friend of Wonder Woman. However, when her friend mocked her beliefs, she stabbed herself with the cursed God-Killer Knife, transforming herself into an animalistic servant of the evil gods. She now spreads chaos in a quest for vengeance as Cheetah!

Intro: Cheetah pounces down to the arena from a high vantage point and faces the opponent, inspecting her claws.

Outro: Cheetah grabs the opponent with her tail and bites them in the shoulder, watching as they transform into a Cheetah-creature.

Character Trait - Hunter's Senses - Cheetah bares her claws, and all of her attacks deal increased damage for a short time.

Super Move - Call Of The Wild - Cheetah lunges at the opponent, knocking them to the floor. She then slashes them several times, before picking them up with her tail, slamming them to the ground, and throwing them away.

Pre-52 - Can be bought with in-game credits.

Ame-Comi - Can be bought with in-game credits.

Rich - Included in the 'Blast From The Past' skin pack.

Animated - included in the 'Only Two Dimensions' skin pack. 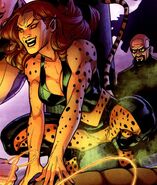 Tigra Costume
Add a photo to this gallery
Retrieved from "https://injusticefanon.fandom.com/wiki/Cheetah_(Dimensional_Rift)?oldid=38244"
Community content is available under CC-BY-SA unless otherwise noted.