Often an enemy but sometimes an ally, Selina Kyle's main profession is that of a master thief. Armed with a whip, bolas and caltrops, she uses her skill at both agility and seduction to steal what she can. Even Batman can't remain immune, and there's a reason the police hate to hear from Catwoman!

Intro: Catwoman backflips onto the arena from a rooftop, before entering a battle pose and retracting her claws.

Outro: Catwoman brings her boot down on the opponent's head, knocking them unconscious. Then, Iris comes up to her with a pouch of diamonds in her mouth, which she takes.

Nineties - Can be bought with in-game credits.

Sixties - Can be bought with in-game credits.

The Cat - Reward for completing Classic Battle with Catwoman. 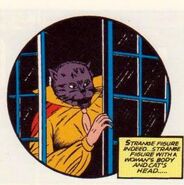 Black Cat Costume
Add a photo to this gallery
Retrieved from "https://injusticefanon.fandom.com/wiki/Catwoman_(Dimensional_Rift)?oldid=38550"
Community content is available under CC-BY-SA unless otherwise noted.