Natalia Romanova a.k.a Natasha Romanoff is one of the world's greatest spies. Raised by the Russians to infiltrate and destroy America, Romanoff defected and aids S.H.I.E.L.D. and the Avengers as the beautifully deadly Black Widow!

Intro: There are multiple shots of Black Widow suiting up (e.g. putting on bracelets, belt, guns) before showing her enter her combat stance.

Outro: Black Widow punches the opponent in the face. The scene shifts to them waking up in a Quinjet cell whilst Black Widow is in the cockpit, radioing S.H.I.E.L.D.

Super Move - In Soviet Russia - Black Widow fires two SMGs at the opponent. She then somersaults over them, electrocuting them with her Widow's Bite along the way. Finally, she electrocutes them once more in the back before flipping them over her shoulder.

Ultimate - Can be bought with in-game credits.

Eighties - Can be bought with in-game credits. 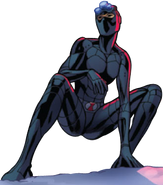 Talia Al Ghul Costume
Add a photo to this gallery
Retrieved from "https://injusticefanon.fandom.com/wiki/Black_Widow_(Dimensional_Rift)?oldid=38210"
Community content is available under CC-BY-SA unless otherwise noted.