Dr. Hank McCoy was has used his mutation, which grants him an animalistic appearance, to his advantage, becoming a renown scientist and advocate for mutant rights. He also defends the world as a member of both the X-Men and Avengers as the hero Beast!

Intro: Beast is in his lab, reading a scientific book. Suddenly, a siren sounds and Beast leaps away, appearing on the arena.

Outro: Beast is back in his lab, with the opponent strapped to a gurney behind him. He begins to upload genetic information from the opponent to his computer and returns to reading his book.

Character Trait - The Claws Are Out - Beast releases his retractable claws, causing his hand-to-hand attacks to deal extra damage.

Super Move - Beast leaps at the opponent and knocks them to the ground, beating them. He then takes out a syringe and takes some of the opponent's blood. He finally picks them up by the throat and throws them to the other side of the stage.

All-New - Can be bought with in-game credits. 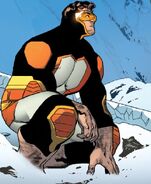 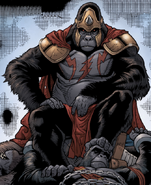 Grodd Costume
Add a photo to this gallery
Retrieved from "https://injusticefanon.fandom.com/wiki/Beast_(Dimensional_Rift)?oldid=38217"
Community content is available under CC-BY-SA unless otherwise noted.